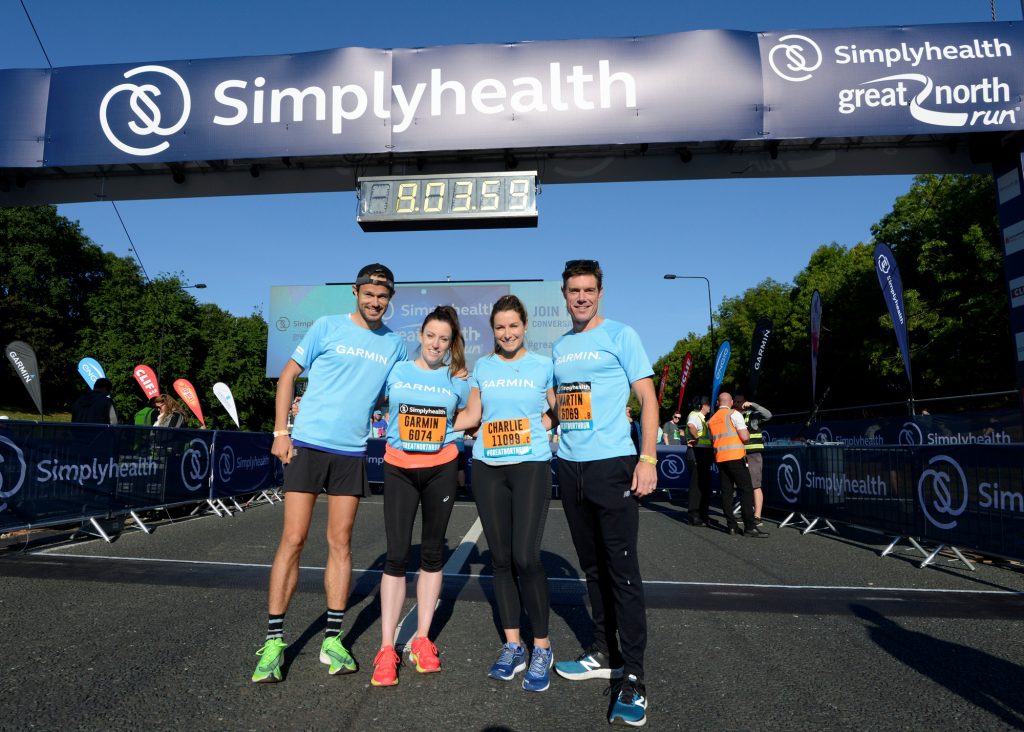 The Simply Health Great North Run is the biggest half marathon in the world. Each September 57,000 people run the 13.1 miles from Newcastle to South Shields… and this year I was lucky enough to be one of them.

It’s an event that had been ‘on my to-do list’, so when Garmin asked if I’d like to run it with them I jumped at the chance. Martin Yelling was also running as part of #teamgarmin and kindly offered to coach me in the lead up to the race. We decided on a challenge of completing the race in under 2 hours.

I spoke to a lot of friends who had run it previously and they all gave me the same advice.
‘Run to enjoy, it’s not a PB course due to the volume of people but the atmosphere is incredible.’

Was it possible? With only 5 weeks of training, I wasn’t sure, but I was determined to give it a good go.

I’m a bit of a simple runner; I press the start button on my watch when I head out for my run then press stop when I’m finished. I tend to stick to one, steady pace and focus on completing a certain distance. Martin set me a session a week. We did progression runs, intervals, kilometre sprints, all whilst learning to understand what ‘race pace’ felt like.

I even went to the athletics track one night, somewhere I’d previously been too scared to go as I associated it with ‘where the fast people train’. Fitting the training into a short space of time was tough – but I found these sessions really beneficial. I starting relying heavily on my Garmin during training, using functions that I hadn’t used before. The Garmin Connect app is really handy as you can monitor your training status and performance stats. 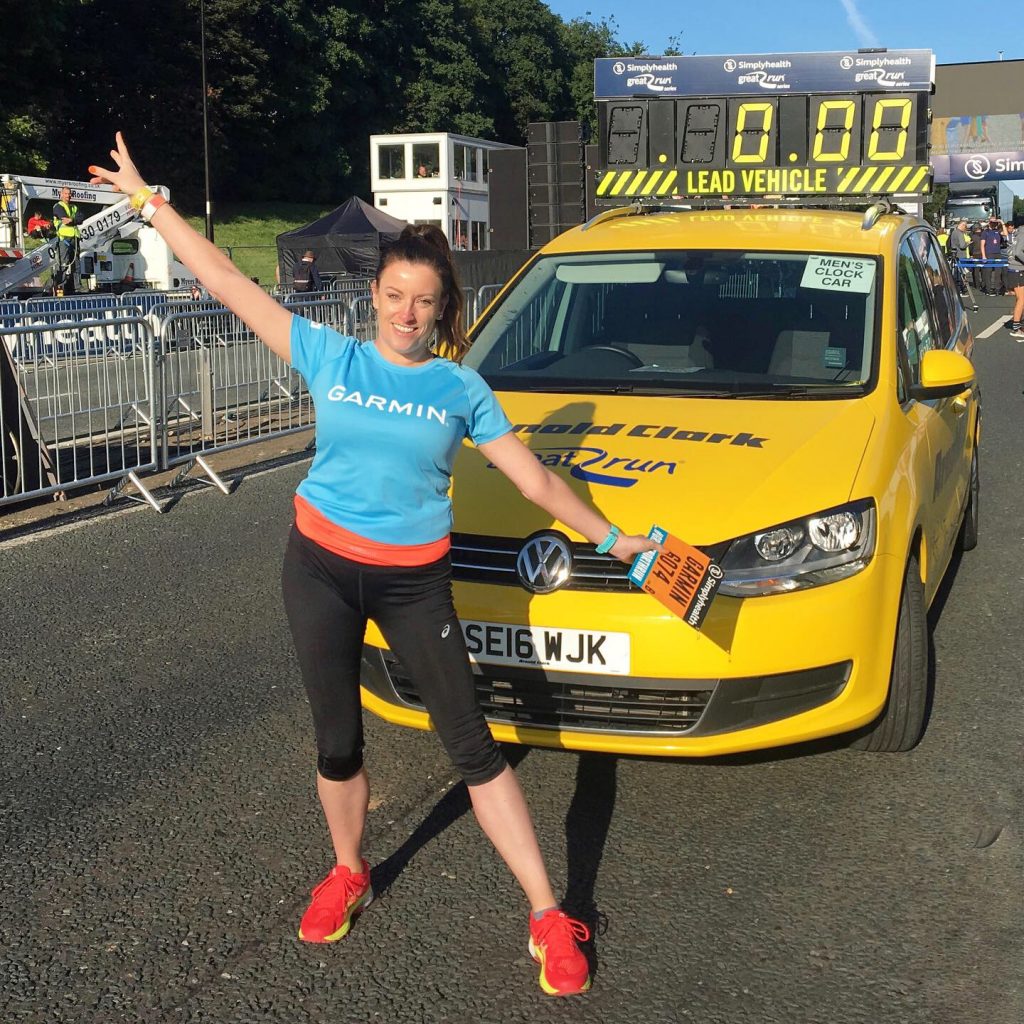 We had an early start on the morning of the race. The weather had been kind, it was just a touch warmer than ideal race conditions. We were lucky enough to be taken to the start via VIP bus. As event VIPs, we had separate baggage and could use the loos without big queues, so that was really handy for all those nervous wees. We were in the area where the TV crews were interviewing runners and celebrities for the BBC coverage. My main priority was to keep out of shot. No one needs to see me scoffing pre-race Haribo behind Gaby Logan!

After an official start line photo with Martin, Charlie and Ben it was a long wait until the start. This was the moment I began to question myself. I’d put our sub 2 goal out there on the internet. If I didn’t make it around in time, I would never hear the end of it.

We were extremely fortunate to start at the front of the race. We got the see the elites head off just before crossing the start line ourselves. It’s a slight downhill at the beginning, even with the early start the course was packed with runners trying to find their own space. Our race plan was to try and bank a little extra time in the first few miles and then stick to race pace of 9.09-minute miles. We soon found ourselves running across the Tyne Bridge which was one of my favourite parts of the race. It’s a shame the bridge is close to the start as we still had 11 miles to go!  Spectators lined the entire route, cheering, handing out sweets, water and ice pops – they were even handing out beer by mile 10!

The course is far from flat. If you’d asked me during the race I would have said it was ‘very hilly’, however on reflection it’s undulating. We were on target and happily ticking off the miles, until around mile 11. After what seemed like a never-ending climb I had to take a breather (sorry Martin). I looked at my split of 9.34 and thought the sub 2 goal was slipping away. As I approached the last water station at mile 12 I had to stop again, 9.38 flashed up on my watch and felt deflated. That’s when Martin pointed out the sea just ahead of us. From here it was a short, steep downhill section onto the seafront. Knowing there was only a mile to go really spurred me on.

The South Sheilds seafront was lined with spectators. The final mile seemed to fly by, my eyes glued to my Garmin. Due to my walking break on John Reid road, the sub 2 attempt was going to be close. Mile 13: 8.33, was this going to be enough? As we were approaching the finish Charlie caught Martin and I up, she grabbed my hand and we all crossed the finish line together. #teamgarmin

Unable to speak and still catching my breath I looked at my watch, we’d done it. Not only a sub 2 but a new half marathon PB of 1.56.48.

The Great North Run is by far, the biggest race I have ever taken part in. It’s a fantastic event and certainly one to do if you don’t mind big crowds.
As I write this I’ve even forgiven John Reid for the big hill.

For more information on the Great North Run Click here

*Race entry kindly gifted by Garmin – I used the Garmin 245 music for my training.
Trainers gifted by ASICS

Race Breakdown
Entry Cost: My race entry was kindly gifted
Water stations: Every 2 to 3 miles.
Parking: Yes, but I was told the metro is your best bet!
Photos: Yes
Baggage Facilities: Yes
Post Race Goodies: T-shirt/medal/goody bag – Not sure about the tuna in the goody bag.
Highlight: Crossing the Tyne Bridge and the final mile along the seafront
Low point: The aforementioned tuna  – I’m more of a mars bar girl.