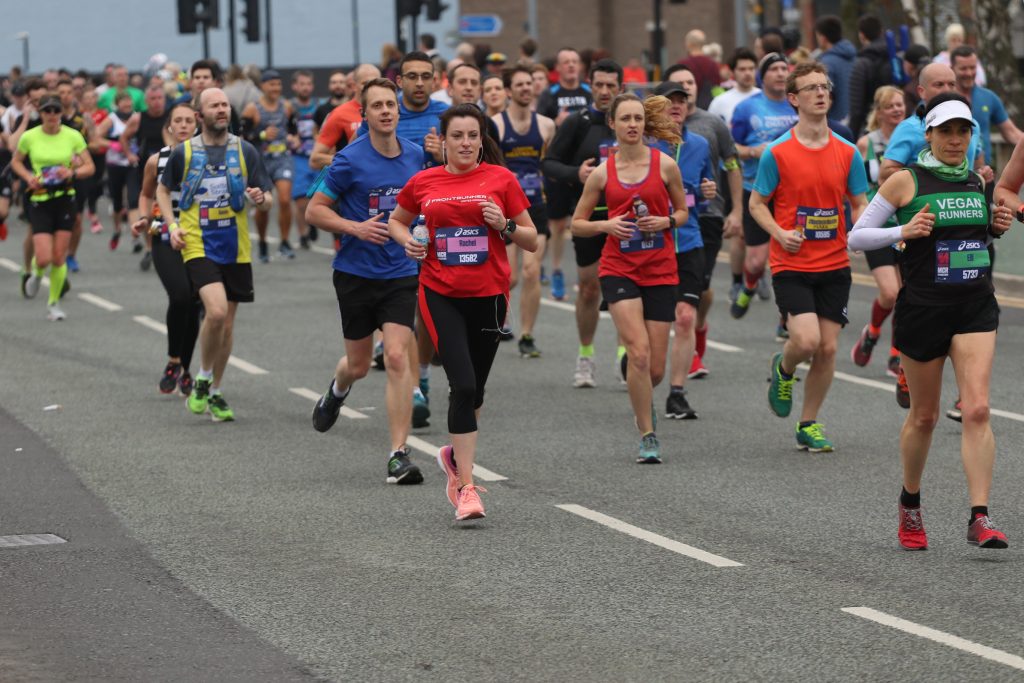 Last weekend I ran the ASICS Manchester Marathon. It’s becoming a firm favourite on my race calendar with it being my 4th year taking part. This year was a little different. I found out I made the ASICS FrontRunner team a few weeks ago and the first team meet-up coincided with the weekend of the marathon. I think I was more nervous about the FrontRunner part of the weekend than I was about the marathon on Sunday. I’m still in shock over being selected out of the thousands of people that applied.

I headed to Manchester on Friday to meet my new teammates. Not only are they a very inspiring bunch they are all incredibly lovely. We spent the weekend getting to know each other, having photo shoots, learning all about ASICS and on marathon eve we watched the film Skid Row. If you haven’t seen it yet – I’d recommend it, it’ll leave you feeling ready to run!

This marathon was a bit of a comeback race for me. I ran 4.20.07 last year and then got injured. When I ran Loch Ness marathon towards the end of last year, I followed a very basic beginners plan to ‘get me over the finish line without injuring myself again.’ This worked and I finished in 4.44 – my second slowest marathon time. It was a feeling of frustration but I was also happy to be running pain-free again.

My goal for Manchester was to get back to the level of fitness I had at the beginning of last year. Sub 4.30 was the goal but if I could knock off those 7 seconds and come in under 4.20 I’d be over the moon.

My training started mid-December, I put the miles in over the 17 weeks, however, I really struggled on my last two long runs. The race day plan was to turn up, trust the training, enjoy it and hope for the best.

Before the race
We woke up to perfect race conditions as we made our way to the start. The event village was clearly signposted and the baggage drop ran like clockwork. With 20,000 runners taking part this year the race was set off in waves – which really eased the congestion at the start. I was grateful to be waiting in the starting pen with new teammates Livvy and Becca. They certainly helped with the pre-race nerves and the three of us crossed the start line together.

During the Race
The atmosphere at this race is incredible and I seemed to breeze to the 16-mile point, I felt comfortable hitting the halfway point in just under 2 hours. I only had one working earphone and I’d spent most of the race trying to work out what song I was listening to which took my mind off running. Music really isn’t needed in this race. If you want a marathon with incredible crowd support – this is one for you. The course takes you through a lot of residential areas and everyone turns out to cheer you on, hand out water and jelly babies. It got a little congested in places – mainly with spectators, but I didn’t mind as they really keep you going! Before I knew it I’d covered 20 miles, just the final 10K to go – which, as some say, is where the marathon really starts.

I swear the finishing straight gets longer every year – you can see it but it doesn’t seem to get any closer! I was holding back the tears as complete strangers were shouting my name as I approached the finish.

I crossed the line in 4.12.55. Amazed. All those weeks of hard work and early morning alarms had been worth it. Massive congratulations to Livvy and Becca too, both of them finishing with massive PBs  ❤️

I called my Dad who told me he had been watching the live stream of the finish and had seen me cross the line.

Manchester – you were awesome and I loved every second. I feel like this race has a bit of a reputation as an alternative or a backup plan for when people are unsuccessful in the London Marathon Ballot.

Please don’t class this as a ‘second choice’ option as it’s a worthy winner. It’s well organised, with great support and an incredible atmosphere.

See you again next year 🐝 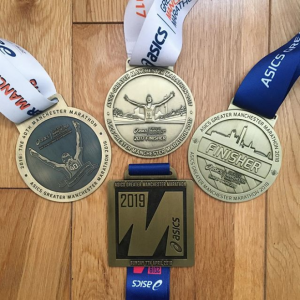