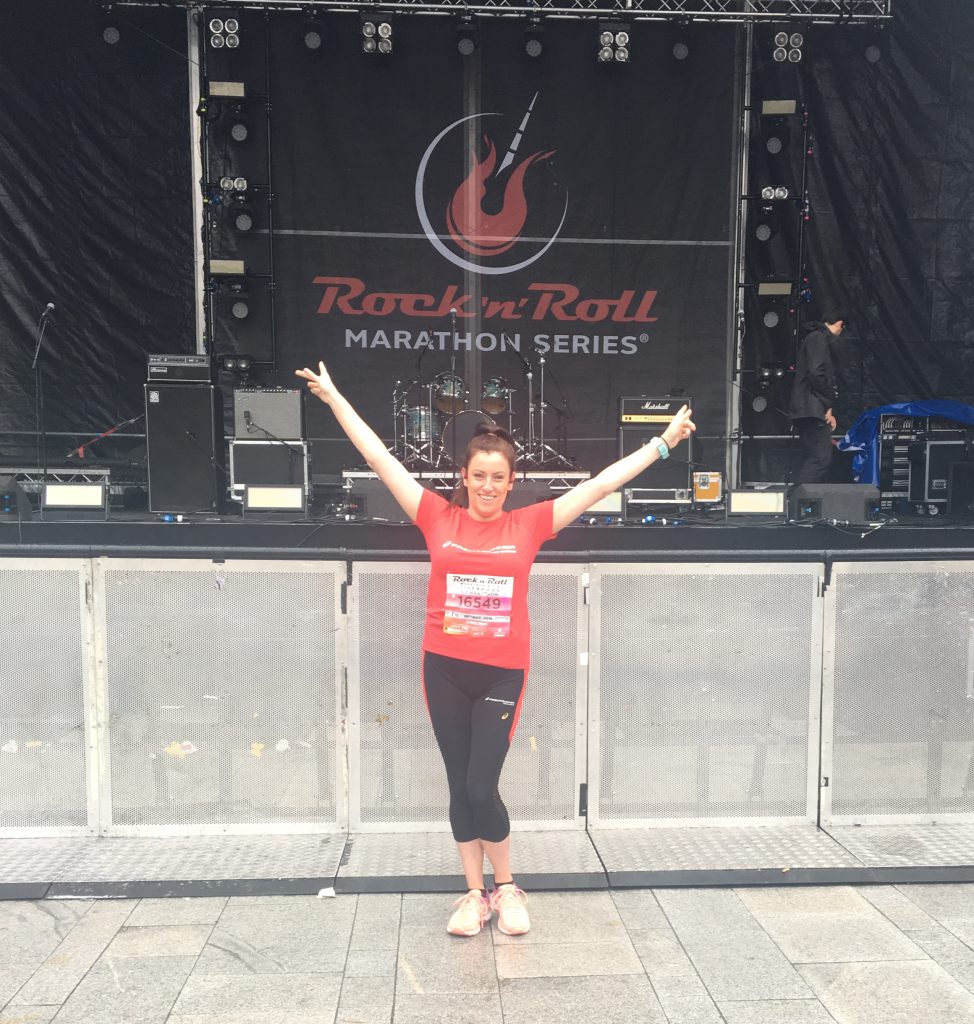 I’m back in Liverpool
And everything seems the same….

The Rock ‘n’ Roll series is a whole weekend of music and running, starting with a 5k on Saturday, a half and full marathon on Sunday and a mile fun run Sunday afternoon. It has local bands offering on course entertainment and a finish line festival. 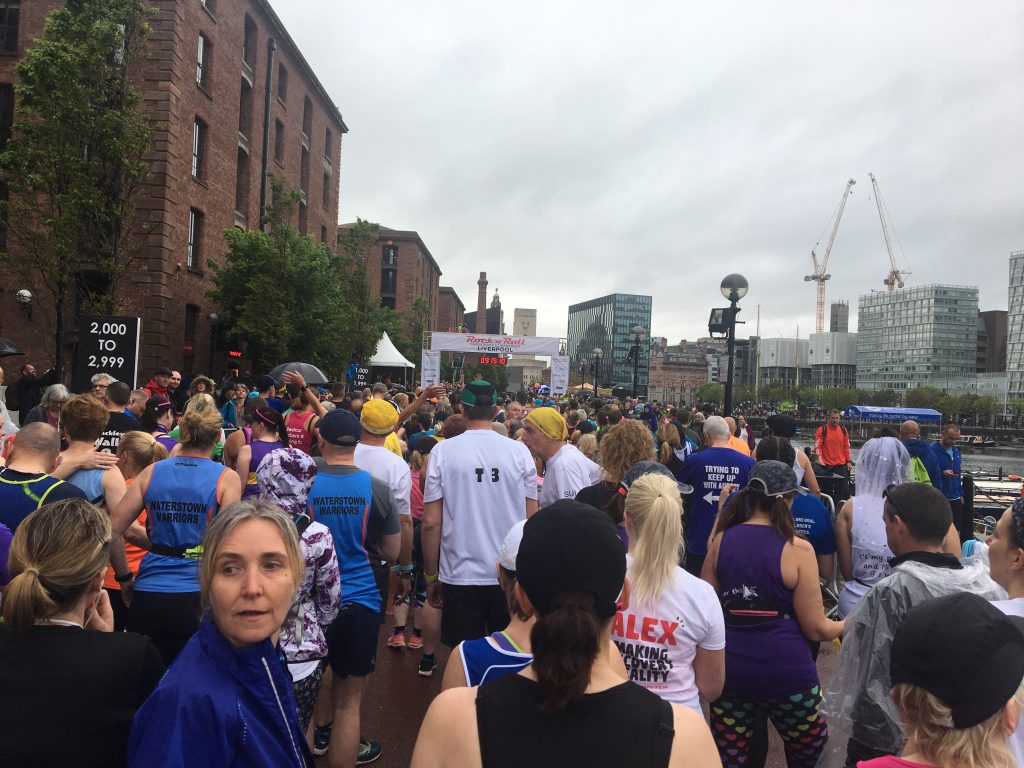 This year I was there for the half marathon. I was originally running the full, but I’ll be honest,  last year I injured myself between Manchester and Liverpool marathon. I was so paranoid that it would happen again, I was overly cautious with the training. I felt more confident running the half than doing the full ‘for the sake of it’.

I popped along to the Run Fit Expo the day before the race to swap my race entries over. It was definitely an improvement on last year and seemed to be a lot busier. I was really pleased the race has an Expo as I’d forgotten my gels.

The route
I like to think of this race as a 13.1-mile sightseeing tour of Liverpool. The route takes in a lot of the sights including the Eleanor Rigby Statue, Matthew Street, John Lennon Statue, Cavern Club, Chinese Arch, Anglican Cathedral, Princes Park, Sefton Park, Penny Lane (I still haven’t seen that barber showing photographs of every head he’s had the pleasure to know!) and the Otterspool Promenade. It finishes on the Kings Parade waterfront at Exhibition Centre Liverpool.

If the sun don’t come you get a tan from standing in the English rain
It was a lousy day, pouring with rain and very windy in places. Despite the unfortunate weather, runners were raring to go as we joined the masses and headed to the start pens. I started the race with some friends, so set off a little further back. I spent the first 5 miles overtaking people in fancy dress – there really were some cracking costumes. The live music along the course really kept people going, although I missed the steel drums this year. 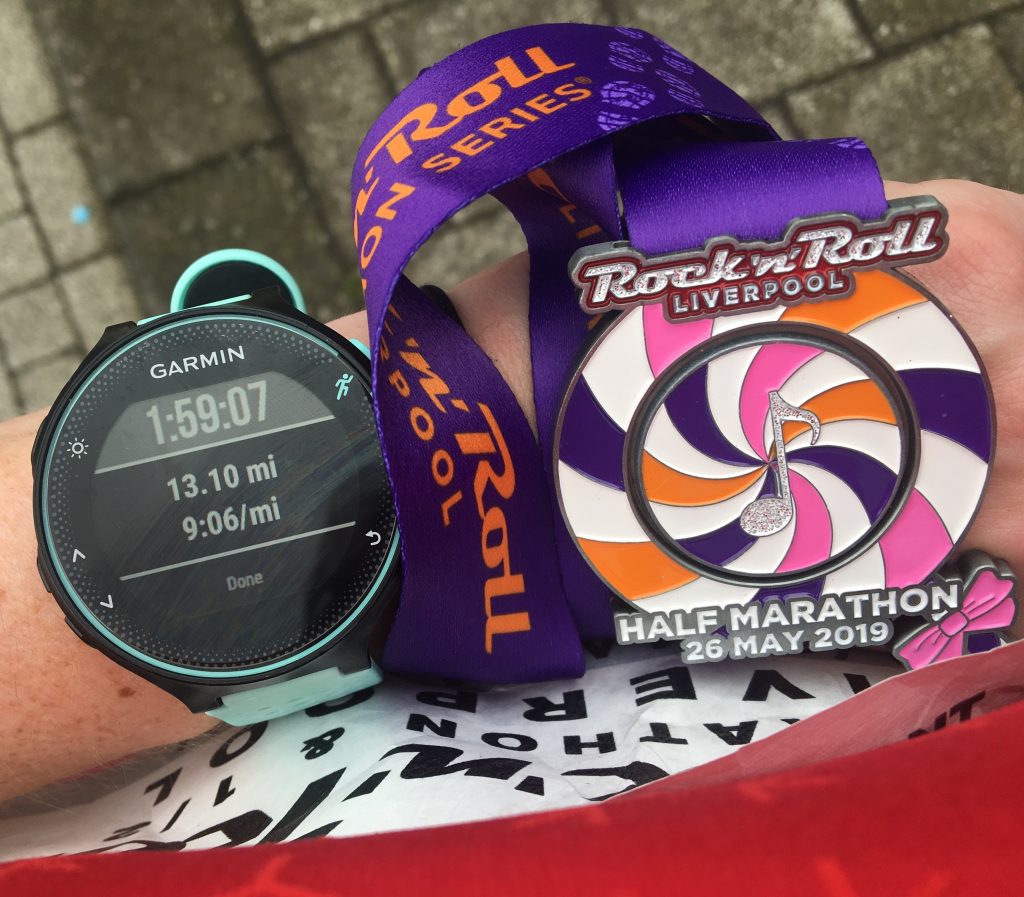 I had no plan but to enjoy this race. It was one of those races where I start my watch as I cross the mats and don’t look at it again until the finish. With all the on-course entertainment you don’t need earphones. I only put my music on the last 4 miles along the prom. I finished with a time of 1.59.08 which I was over the moon with. A sub 2 half was something I worked at for years to crack. It’s crazy to think that now, I can just go for a ‘fun’ one and achieve that time.

Let’s rock and roll…
The action on the main stage starts shortly after the half marathon ends, which is why I prefer the half distance here as you get to enjoy more of the weekend. The sun came out just in time for this years headline act, Toploader. I wasn’t a huge fan of theirs 20 years ago but they really rocked the main stage. 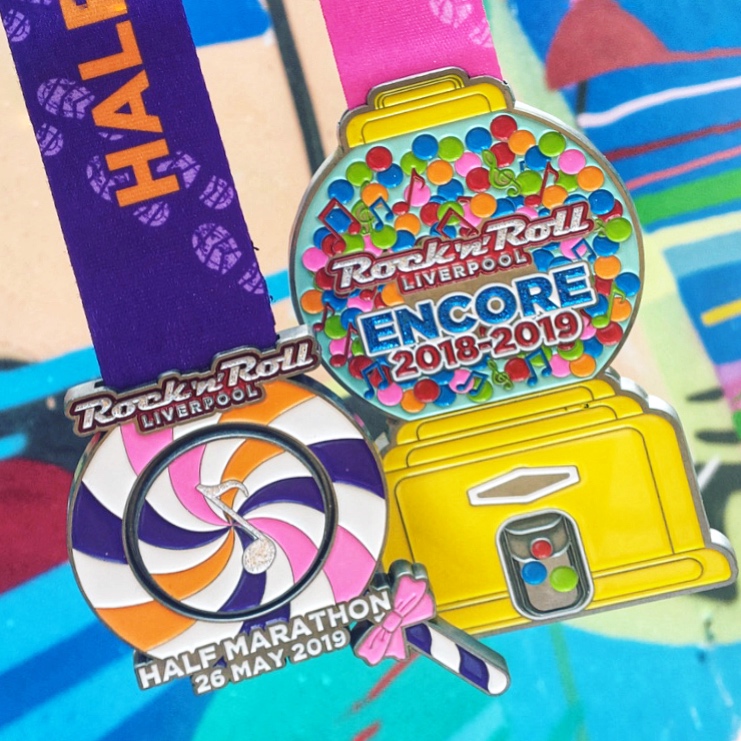 The Bling
This year the medals were all sweet themed, which, when I first saw the pictures online was disappointed with. I much prefer the music-themed ones. However, once it was in my hand, my disappointment was soon forgotten.

Play it right on rock and roll weekend and you can come away with a huge haul of bling.
You get your finishers medal.
The encore medal – you can get if you also ran the race the previous year. If you run the 5k on Saturday and the half / full Sunday then you also get a Remix medal (as well as your 5k finishers medal), add in the mile race on Sunday and there is the chance to come away with 5 medals!

There are also even more medals to collect if you run multiple events with Rock and Roll over the year.

Liverpool, once again you rocked, I’m about to take full advantage of the early bird prices and sign up again for next year!