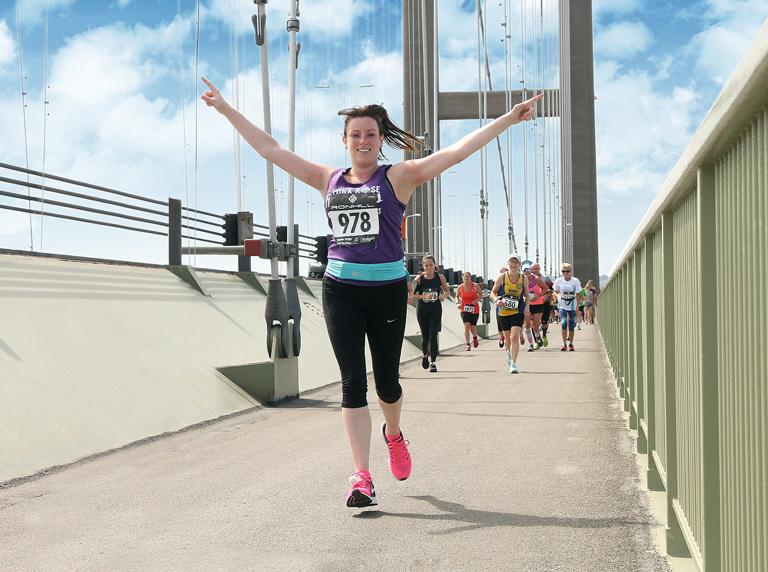 Last weekend I took part in the East Yorkshire’s biggest half marathon – the Humber Bridge Half Marathon. It was the third time I’ve run this and this year was completely unprepared. I’ve spent the last 11 weeks recovering from an injury, so I’ve done very little running in terms of distance and a lot more gym based stuff. I had no goal time in mind, I just wanted to enjoy it and use it as a way of assessing my fitness levels post-injury.

Featuring a few steep climbs and the well known ‘cardiac hill’ – a 1-mile climb at mile 9. It’s not an easy course but a great route for training or if you want to challenge yourself.

Before the Race
Runners meet at The Humber Bridge county park, with plenty of parking nearby. It’s well signposted and marshalls were really helpful in directing people where to go, if in doubt just do what I do and follow everyone in tech-gear. The queue for the loos wasn’t too bad – but they didn’t smell that great! Just before 9 am we were directed to the start area, there were no zones or pens but you couldn’t fault the organisation.

The Humber Fun Run, a 2.5-mile route, started in the same area, shortly after at 9.10am

The Route
The race starts and ends at the Humber Bridge county park. It heads out over the bridge to Barton on Humber, loops around before joining the bridge again back into the start area in Hessle.

I was grateful for the early start as we missed the worst of the heat. Running over the bridge has to be my favourite part of this race. It is pretty impressive and it’s a welcome sight to see it on the way back, even if there is another little incline to get onto it. 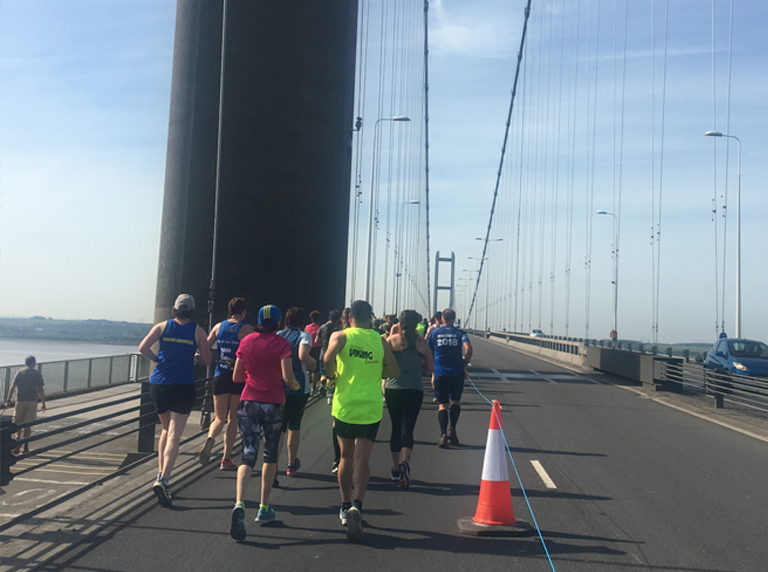 During the Race
Headphones were banned for this race as some of the roads weren’t fully closed. I was disappointed to see how many runners had ignored that rule. I loved it – I spent 13 miles chatting to / encouraging other runners! Due to the heat, I was taking it steady, I stopped at each water station and walked as a little as I can’t drink from a cup and run!

The crowd were great, everyone out with garden sprinklers cooling us all down. They were there for much-needed support on the tougher sections of the course, if one more spectator told me to ‘Weerrk those hills’ I was ready to drag them up there with me!! Thanks to the sprinklers hosing us all down and the sponge station at mile 9 I crossed the finish looking like I’d just stepped out of the shower but I’d kept cool, which was the main thing. 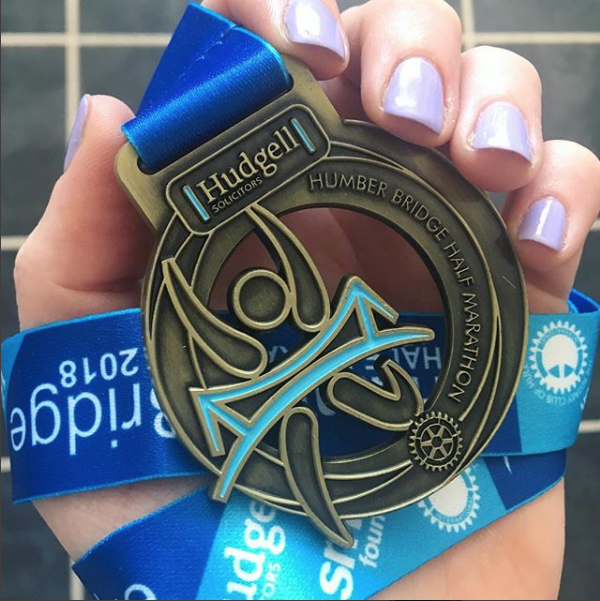 Post race
I finished in 2.10.40 according to my phone app (I’d forgot my watch as well as a gel)  or 2.10.53 according to my chip time. Let’s go with the chip time. Usually, my watch is fairly accurate – a second either way. I wasn’t out for a time so it wasn’t really a problem.

There are no goody bags (which is great, less plastic) you are handed a medal and t-shirt as you cross the finish, Huge thank you to the volunteers as always.

If there had just been the option of a mars bar at the end instead of a banana I’d have loved it even more! I’ll certainly be back next year.

Entry Cost: £26.00 Unaffiliated / £24.00 Affiliated
Water stations: Around every 2-3 miles (cups). One later station with bottles
Parking: Plenty just get there early avoid queues
Photos: Yes, and cheap as chips at only £4.95 per download
Baggage Facilities: None, I was aware of
Post-Race Goodies: T-shirt / medal / water / banana
Highlights: Great atmosphere, running over the bridge.
Low points: It was a bit warm