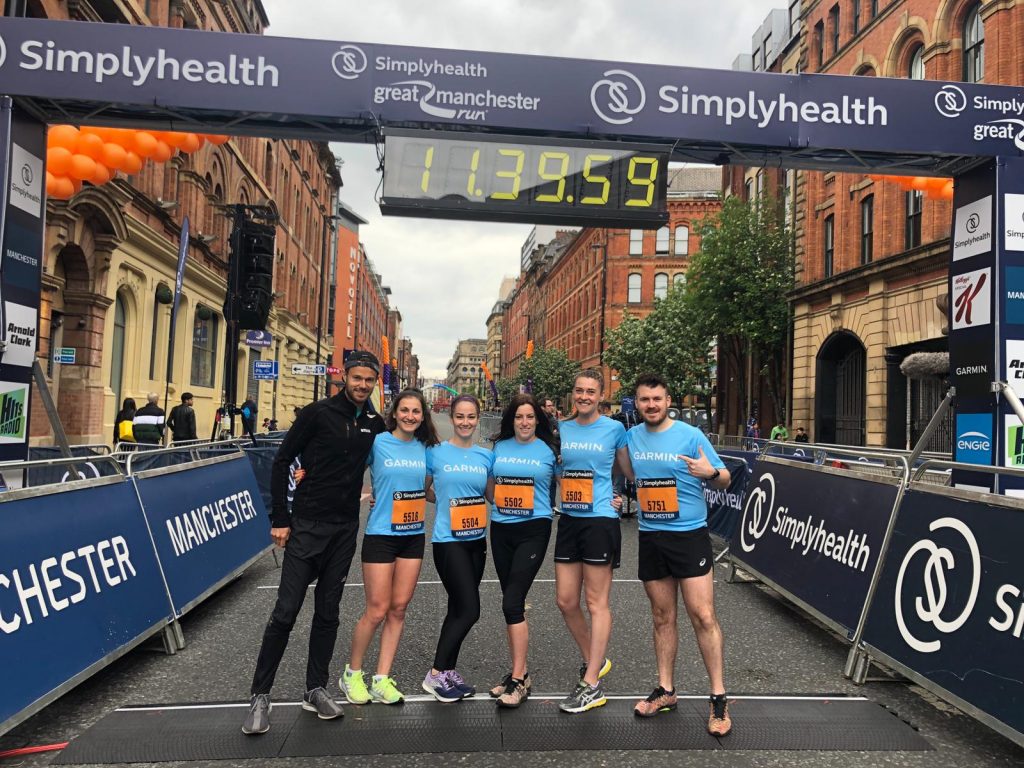 “The thing about Manchester is… it all comes from here”
Noel Gallagher
…and it certainly came from the heart on Sunday.

I was very kindly asked by Garmin if I’d like to join them for the Simply Health Great Manchester Run. Obviously, I jumped at the chance. I hadn’t taken part in this race before but I’d always watched the TV coverage and been inspired by it.

The Great Manchester Run is known for being Europe’s biggest 10km race, with thirty thousand runners descending on the city ready to run the fast and flat course. There is a half marathon that takes place in the morning with the 10k kicking off just after 1pm. This was good news to me as it meant there wasn’t the usual early race day start. I arrived in Manchester just before 11 and met my Garmin teammates for the day;  Jenna, Fudgie, Anna, Kirsty and Ben. Having followed them online for a while it was so good to finally meet up and meet the faces behind the Instagram feed.

Before the race
After an introduction and photos, it was almost time for the race to begin. The start area was buzzing with Manchester anthems blasting from the speakers (musically, this is my kinda playlist).

Several helicopters were flying overhead capturing the race for the live coverage on BBC2. As we took our places in the orange pen a WhatsApp message from my Mum flashed up on my Garmin ‘Rach, I’ve just seen you on the TV walking to the start line.’ I can’t go anywhere these days! 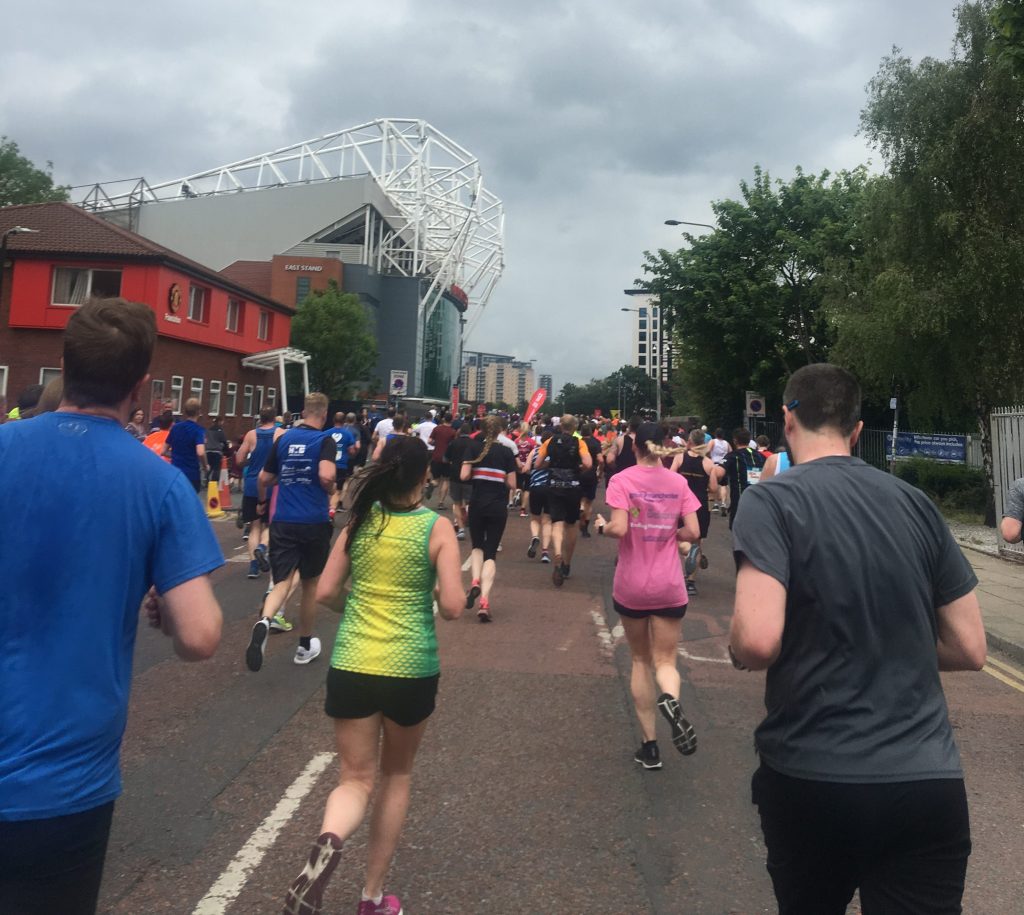 During the Race
As it was a last minute entry I had no plan for this race, I was just there to enjoy it. This works well for me as I seem to perform better without any time pressure. We were really lucky weather-wise, even with the late start it was perfect running conditions.

At 13.02, we were off along with the male elites. With the high number of entrants, the race starts in half hour waves to it ease the congestion at the start.

I’m not very familiar with Manchester but I recognised the bit around Old Trafford from the marathon route. There was a fair bit of entertainment along the course, music, drag queens, DJs and my personal favourite, a guy dancing to Oasis in a Liam Gallager mask.

Around 2 miles in I ran passed one of the girls from Corrie – which made my day. I had been hoping to spot a soap star as I’ve no chance of recognising any of the footballers. Because I’m used to running long distance the miles seemed to fly by. Before I knew it the ‘400 metres to go’ sign appeared. All I could think about was how much I hated running around the 400m track at school and here I am now, some 20 years later. It’s funny how things change. 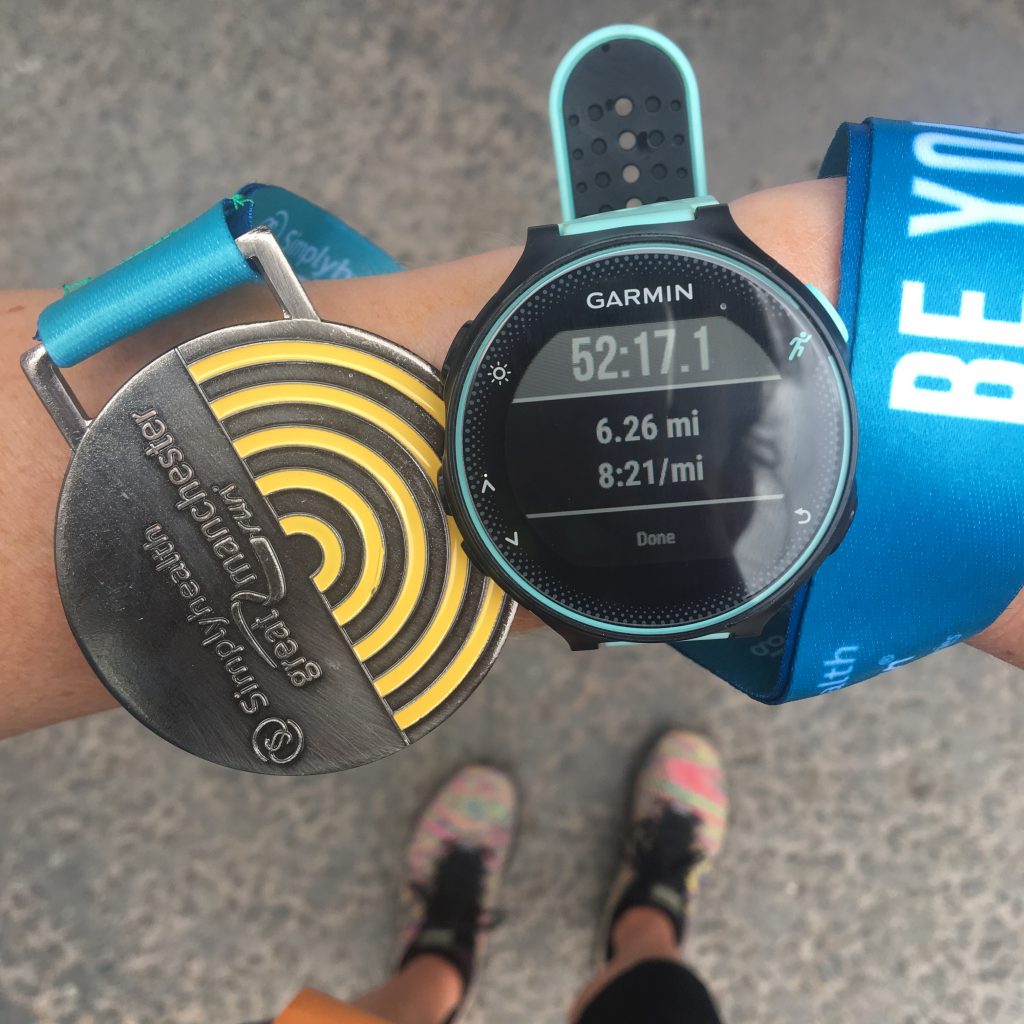 Whilst having terrible flashbacks to PE lessons and those awful bottle green knicker shorts they made us wear, I looked up to see the finish right in front of me. I crossed the line with an official time of 52.16 (Apologies for the picture, I accidentally started my watch again instead of hitting save).

We were quickly moved over the line and handed medals and goody bags. It’s the biggest goody bag I’ve had post race – you know you’re getting old when you get excited by a free washing powder sample! The party continued along Deansgate with official event partners on hand to offer advice, demonstrate products and hand out samples.

Garmin was showcasing their new Forerunner 245 Music. Not only does it offer everything you need to analyse your workout it also syncs with music streaming services, such as Spotify® and Deezer, allowing you to store and play your favourite songs right from your watch. With phone-free listening that’s one less thing for me to carry and super handy for my Manchester anthems playlist.

Post race team Garmin regrouped and had another photo before making full use of our VIP wristbands. We headed to the hospitality area in the hope of spotting Michael Carrick or Ryan Giggs. Sadly we didn’t have any luck there, but we did have a very yummy post-race lunch.

It was a great day with a really lovely bunch of people. Being the huge geek that I am I watched the whole thing back on catch-up TV when I got home.

If you haven’t done this race I would recommend it. I really enjoyed it – a fast, flat course with a friendly northern atmosphere. If you’re lacking motivation what the TV coverage – it’ll have you reaching for your trainers.

A huge thank you to Garmin for inviting me to be part of their team for the day.
You can find out more about the Garmin watch range here 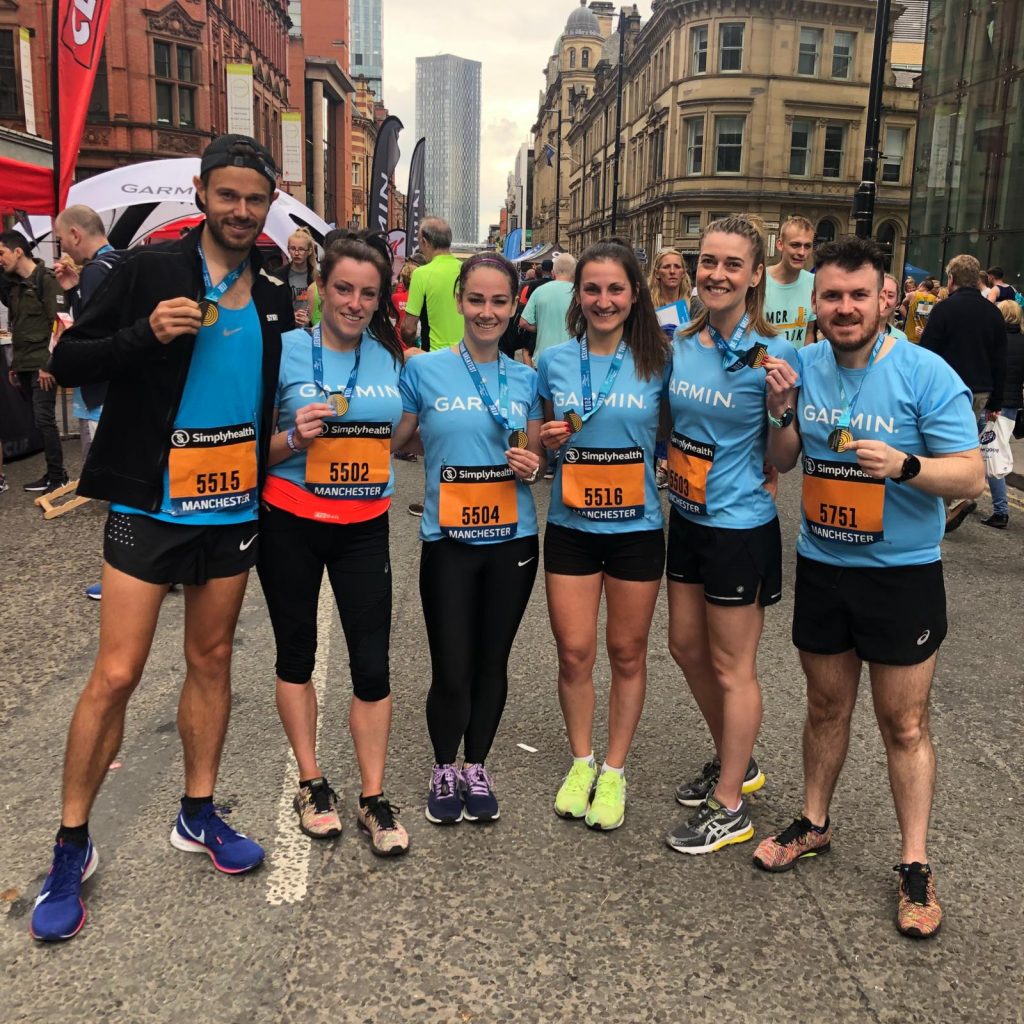 **My race place was kindly gifted my Garmin