Last weekend I took part in the ASDA Foundation Hull 10k which is part of the Run for all race series. It’s been a good few years since I last took part in this event and I don’t remember that much about it other than it was baking hot.

This year was slightly different though, as I’d been asked to be one of the official pacers, which I was really excited about.

Before the race
It was an early start as I arrived at the event village at 7.30am to collect my race number. It wasn’t long before a few other pacers arrived. ‘You’re dressed in all black you must be pacing too?’ seemed to be the standard opening line.

We collected our flags and had a team photo in the sponsors’ t-shirts before heading to the VIP area where we could have refreshments / use the posh loos while awaiting the start.

There were two races that day. The half marathon which started at 9 am followed by the 10K at 9.45am.

We were pacing in pairs, which made it seem less intimidating. Dave and I were pacing an 80 minute (1hr 20) 10k.

This was my first time in pacing a race. I hadn’t practised running at that speed, but I was confident I could easily maintain it. We were advised to come in 30 seconds under our flag time – I guess this is so if you are running as a pack anyone running behind you rather than parallel with you will still come in on time.

We positioned ourselves in the pens for the warm-up, we had quite a large group with us. Always interested to hear peoples running stories I got chatting to them. A few ladies had been following a couch to 5k programme and then gone on to do 5k – 10k. It was going to be the first 10k they ran today.

The route
The race starts in the city centre, setting off from Alfred Gelder Street to Citadel Way, South Bridge Road and skirting Victoria Park.
From there it is past Hull’s famous The Deep museum and a full lap of the pretty-as-a-picture marina, then back to Whitefriargate, past the City Hall and back to the grand finish outside the Guildhall!

There are a lot of out and backs on this course. Personally, I don’t mind them as you get to see other runners, but I know they are not for everyone.

During the race
The gun went off and it wasn’t long before we crossed the start line. I’d switched my Garmin to km as I thought it was easier to work out an 8min km that 12.48 min miles. We had a few fancy dressers with us – Super Mario, who runs it every year with his musical bucket and Scooby do and Shaggy – the rest of the cast was running too.

Hats off to anyone that runs in a costume. It was a warm day and quite humid in places but there was a nice wind along the River Humber to cool you down.

We hit each KM flag bang on target. Pacing is multi-tasking at it’s best. The miles were spent clock watching, encouraging and motivating other runners (without being annoying), pointing out obstacles on the course and telling everyone about upcoming water stations. We found that by pacing in pairs people seemed more inclined to chat to us / join us the time flew by.

It was tough at times, you get chatting to other runners, they tell you their stories and reasons for running that day, you desperately want to stick with them to the end but you are running to a set pace. People caught us up, others slipped away but I really hope we were of help and support to them at some point during the race.

We had a few ‘silent stalkers’ a man caught us up on the finishing straight to say he’d had his eyes on our flags the whole way around. He was determined to finish just ahead of us which was lovely and we gave him some much-needed encouragement as he passed us.

The result
I’m happy to report an official finish time of 1.19.30. Spot on the required pace. I loved every minute of it, helping others is far more rewarding than a PB.

A huge thank you to Nick for letting me pace this event, to Tillie for initially asking me and to Dave for being a great company. It was great to meet the rest of the team, a fabulous group of like-minded individuals – everyone was so welcoming. 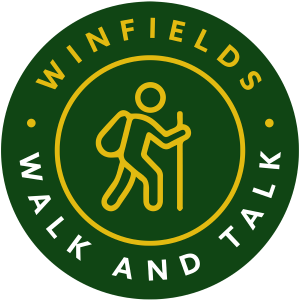